The Tredagh Singers will perform Mozart’s Coronation Mass, in Drogheda on Friday 25th May at 8pm in St Peters Church of Ireland.

They will be accompanied by a full orchestra of musicians from Drogheda and surrounding areas. The concert will open with a selection of favourite choral pieces ranging from Mozart to Karl Jenkins. The choir has been preparing these works for several months 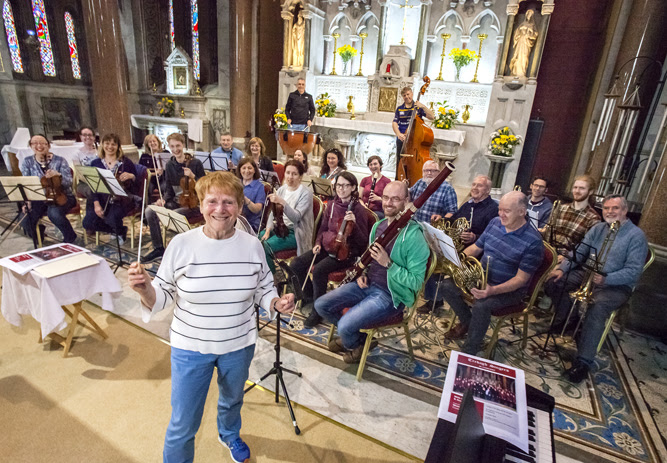 Founded in 1970, Tredagh Singers are a long established choir, originally named St Peter’s Choral Group. It currently has approximately 60 members who enjoy singing a wide repertoire ranging from mediaeval polyphony to the modern composers, under the direction of Geraldine Doggett, a well know choir director and local musician.

Mozart completed the Mass on March 23, 1779.   The mass appears to have acquired the nickname “Coronation” at the Imperial court in Vienna in the early nineteenth century after becoming the preferred music for royal and imperial coronations as well as services of thanksgiving.

Following a very successful performance in St Peter’s Basilica, Rome in 2015, Tredagh Singers travelled to Berlin in 2017 and performed a number of outstanding concerts.  They have just returned from Westport where they had a evening  concert with Cór Mhaigh Eo.

Geraldine Doggett Musical Director Tredagh Singers said, “This combination of local musical talent both orchestral and choral is going make an exceptional performance that should  not to be missed”

“The choir are really looking forward to performing this Mozart masterpiece.  It is really exciting to be part of an ambitious choral project like this.”

Tickets €20 are available from any choir member, or from Down Syndrome, Louth Meath.