Designed by William Farrell in the first part of the nineteenth century, this fine church is thought to be built on the site of the abbey of Lann Leire. The site retains fabric from the thirteenth to the twentieth century, such as the entrance tower, mausoleum and monuments, which provide evidence of the continued use and importance of it in the local area and county. (from NIAH survey)

CLERGY OF THE PARISH OF DUNLEER

(from an article by Padraig Faulkner, in Louth Historical and Archaelogical Journal, Vol XXIII, no. 2 1996

Dunlere, Dunler, (Dunleer): The name Dunler appears as early as 1212 in Pontificia Hibernica. It was then in the possession of the Knights Hospitallers of Jerusalem.

Walter Haddesore       vicar of Dunler and dean of Drogheda. He summoned the clergy of his deanery for 21st June 1367 and laity of every parish for 22nd June 1367 at St Peter’s, Drogheda.

Richard (Henry) Hyng  was appointed to the perpetual vicarage of the Holy Confessors, Fretanus and Brethanus of Dunleer. He was inducted 11th September 1544.   It is probable that Richard Hyng (Henry) was the last vicar of Dunleer to conduct religious services at Dunler in accordance with the Catholic rite. 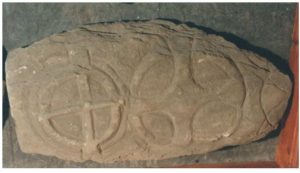 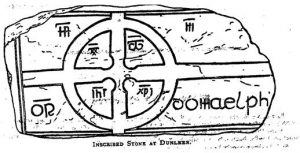 This stone is lying with two other stones, bearing crosses (but no inscriptions) in the porch of the Church of Ireland in Dunleer. It is a slab of sandstone, 3 feet 3 inches by 1 foot 8 inches by 2¼ inches.  The end of the stone is broken off, but otherwise the condition is good.  This fracture, however, takes off the most important part of the owner’s name, which was probably Mael-Phalraio;  the inscription is in the usual formula:

In the cross-head, the stone bears the Alpha and Omega, as well as the letters IHC XPC, found on a few of these slabs, such as those at Glendalough and Tullylease.  In the other cantons are groups of three strokes.  Are these for an M, standing for MARIA? I can think of no other explanation.  If it be correct, the stone is symbolically unique among early Christian slabs in Ireland.  Compare the M in the initial of the name on the stone.

IHC = an abbreviation for the name JESUS

XPC = an abbreviation for the title CHRIST